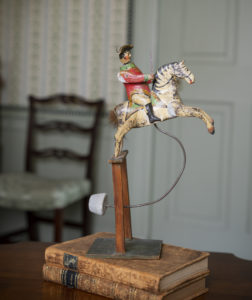 The third floor, accessible only by the back staircase, would have been used for the nursery and children’s rooms, and also shared by servants. These rooms would have been smaller and plainer than most rooms in the house, but would have still contained a fireplace.

While Harrison was often away in Philadelphia on Congressional business, Sally would have overseen the Otis children’s education at a young age. Both boys and girls would have attended school, learning the essentials of education such as reading, writing , and basic arithmetic. But once that knowledge was instilled, boys and girls were taught separately.