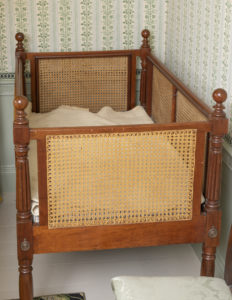 Crib, 1800-1815. Instead of a solid-sided cradle in which an infant was usually swaddled and wrapped in several layers of clothes, new styles of cribs allowed unrestricted movement and the circulation of fresh air.

Sally Foster and Harrison Gray Otis were married in 1790 and Sally gave birth to her first child the next year. When the Otises move into the house, they have four children:

A daughter, Mary, born in 1795 previously died as an infant and shortly around the time the family moves in, a son, George, also dies as an infant. Their son, Allyne, drowned “almost before Sally’s eyes” in the Back Bay when he was ten years old in 1806.

Harrison was away in Philadelphia tending to congressional business for almost half of each year and although she had servants, Sally spent a great deal of time looking after children in this house, especially with such a young family.  In 1797, four Otis children were under seven years old. The Otis children slept on the third floor of the house along with live-in female servants.