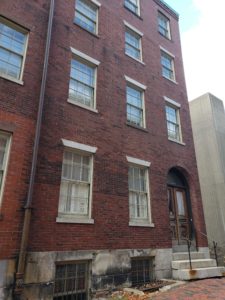 Numbers 14-16 are what remains of a series of four townhouses on Lynde Street, tucked behind Otis House and currently used as office space for Historic New England and its tenants. Numbers 10-12 were razed when Otis House was moved back as part of a street improvement project. In 1925, the city of Boston began the widening of Cambridge Street, transforming it from a crooked cobblestoned street to a one hundred foot wide thoroughfare intended to relieve congestion in the downtown area.

By 1900, 16 Lynde Street had made the transition to from boarding to lodging house.