The shop of the early nineteenth-century cabinetmaker Isaac Vose produced what many consider to be the best furniture made in the neoclassical style in Boston. This couch, made by Isaac Vose & Son for the Marquis de Lafayette’s August 1824 visit to Boston, was recently the subject of intense study and conservation. 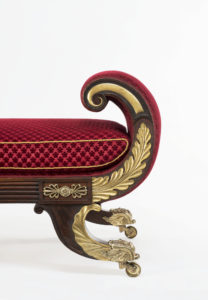 After careful study, furniture scholars discovered “Wightman” inscribed on the front seat rail of the couch, a reference to Thomas Wightman, Boston’s most important carver in the early nineteenth century. Scholars were also intrigued by evidence of original gilding on the piece. A receipt found in the Boston City Archives, revealed that Vose supplied all the furniture for the apartment that Lafayette would occupy in 1824, including “1 Rose Wood Couch Covered with Crimson plush”. These clues all led to  an effort to conserve the couch in 2016-2017, including its reupholstery in crimson fabric, gold cording and tassels, as well as the restoration of the gilding.