In the Federal period, dining became an increasingly important social activity and dining rooms furnished with dining tables made to accommodate a large number of sitters became commonplace. Dinner parties held by the Otises were political as well as social events. The meals were elaborate and consisted of at least three courses. 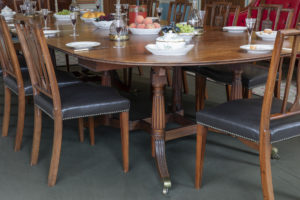 In the Otis House dining room, only two of the dining tables three sections are shown (the third section was stored in the front hall when not in use), and the table with just two sections provides ample seating for ten. This table, which descended in the Appleton family, is one of several that survive with histories of descent in Boston families. All are made with superb craftsmanship and utilize dense Cuban mahogany.