Trade with China reached its height of popularity in the eighteenth century. Before this time, Chinese porcelain was rare in the West, often only in the possession of kings and emperors. In 1784, the Empress of China became the first American vessel to travel to China. Specially ordered armorial porcelain, or porcelain painted with initials on a gilt-trimmed shield meant to mimic armorial porcelain, was a popular export. 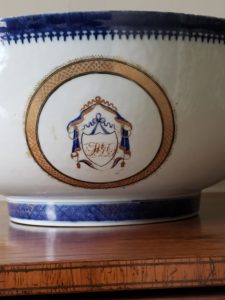 This punch bowl was owned by the Otises, indicated by the initials “HGO” within the shield on the exterior and interior of the bowl. This bowl was kept in a hall niche in the Otises’ third home on Beacon Street, and according to family stories, was much used.