Harrison and Sally Otis had Charles Bulfinch design their third house in 1806.  Note the piano nobile, the balustrade on the roof line, and the Greek key and Chinese fret balconies. Originally, the house probably had the same recessed brick arches on the ground floor as many other Bulfinch buildings.  The granite is one of several later alterations. 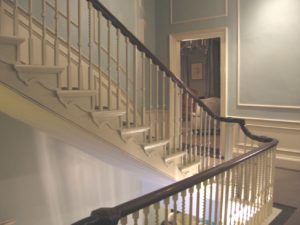 The house has an oval ballroom on the second floor, which originally gave the house a curved outer wall on the right side.  The ballroom overlooked a formal garden.  Otis reportedly gave the grandest balls in Boston, including one in honor of President James Monroe in 1817.  Harry filled in the garden and built the adjacent house with a corresponding concave wall for his daughter Sophia Ritchie in 1831.  This home was where Harry and Sally spent the majority of their married life, and raised many of their children.  Sally passed away in 1836, and Harry in 1848.  The house passed through several owners, many of whom altered the interior greatly.  The current owner is the American Meteorological Society. The house is open to visitors during business hours, although formal tours are not scheduled on a regular basis.