A Room for Entertaining

It has not fallen to my lot to meet a man more skilled at the useful art of entertaining his friends than Otis.

This formal room was reserved for the purposes of entertaining.  The Otises used this room as a parlor or dining room, arranging furniture to meet their changing needs.  The term “dining room” was not used in the Federal era, but if the Otises were to serve a grand meal to many people, this room was the most convenient because it led to the pantry, the kitchen and the wine cellar through the two doors on the far side of the room.  The room was far too formal to be used for simple family meals and it was too much trouble to set up the large table and heat the room for only a few people.

The Federal style continues from the façade of the house into the design of this room. Each window has a corresponding door on the opposite wall, maintaining a strict balance.  This symmetry is kept thanks to the installation of a false door in the opposite corner of the room. The door does not open and was installed purely to keep the room in harmony.

Neoclassical design with its characteristic swags, urns and classical imagery, was increasingly popular in the newly-formed United States. Ancient images borrowed from classical times brought to mind the successful democracies of Greece and Rome, models for the new country.

There is not any part of a servant’s business that requires greater attention and systematical neatness, then setting out his dinner table, and managing for a party of sixteen or eighteen people.

–Excerpt from The House Servants Directory, by Robert Roberts, 1827

How many servants the Otises had is hard to say. The records show five male servants from 1798 to 1800, with no more than two at a time. However, these records can be spotty and only reference men over the age of 18. There were probably younger servants, and we know there were female servants who did not appear in tax records.

The lives of the servants and staff who worked in Federal Boston were closely intertwined and mutually interdependent with their employers, and the Otises would never have been able to maintain their home and family without the labor of these individuals. Servant experiences, due to rapid turnover and lack of records, remains sadly fragmentary. What we do know about three of the Otis’ servants, Abraham Francis, an African American footman, William Burgis, a teenaged coach man, and “Harlow,” a nursery maid, offer a rare glimpse into everyday life at the Otis house and Federal Boston.

Robert Roberts was an author, abolitionist and domestic servant who was employed at Gore Place in Waltham, Mass., the country home of Rebecca and Christopher Gore, fellow politician and Otis contemporary. Roberts House Servants Directory, published in Boston in 1827, is considered one of the first black-authored commercially printed books in America. The Directory dispensed detailed advice on waiting tables, cleaning silver and glass, and general comportment to young men employed in stately homes.

To help with the restoration of this room Historic New England looked very closely at a painting called “The Dinner Party” by Boston artist Henry Sargent.  It depicted an elegant meal c. 1821 and provides a great deal of information about dining rooms of the era and how dinner parties were arranged. When recreating the Otis House dining room, the red curtains, wall-to-wall carpet, green crumb cloth under the table, and classical busts over the doors were all inspired by “The Dinner Party.”

It was common for dinner parties in the late eighteenth century to be exclusively for men, although the Otises gave parties for mixed groups.  The table in the Otis House dining room is set up almost identically to the table in the painting, with a fruit and nut course, several wine bottles and a single candle for lighting cigars.

Shutters are drawn to keep out the late afternoon sun, and red curtains take the form of swags so popular in neoclassical design.

The green baize crumb cloth was considered necessary to protect the expensive carpets from spills, and was used even during the fanciest dinner parties.

Busts of classical scholars and philosophers were often found in Federal period homes, demonstrating the appreciation and fascination for antiquity. 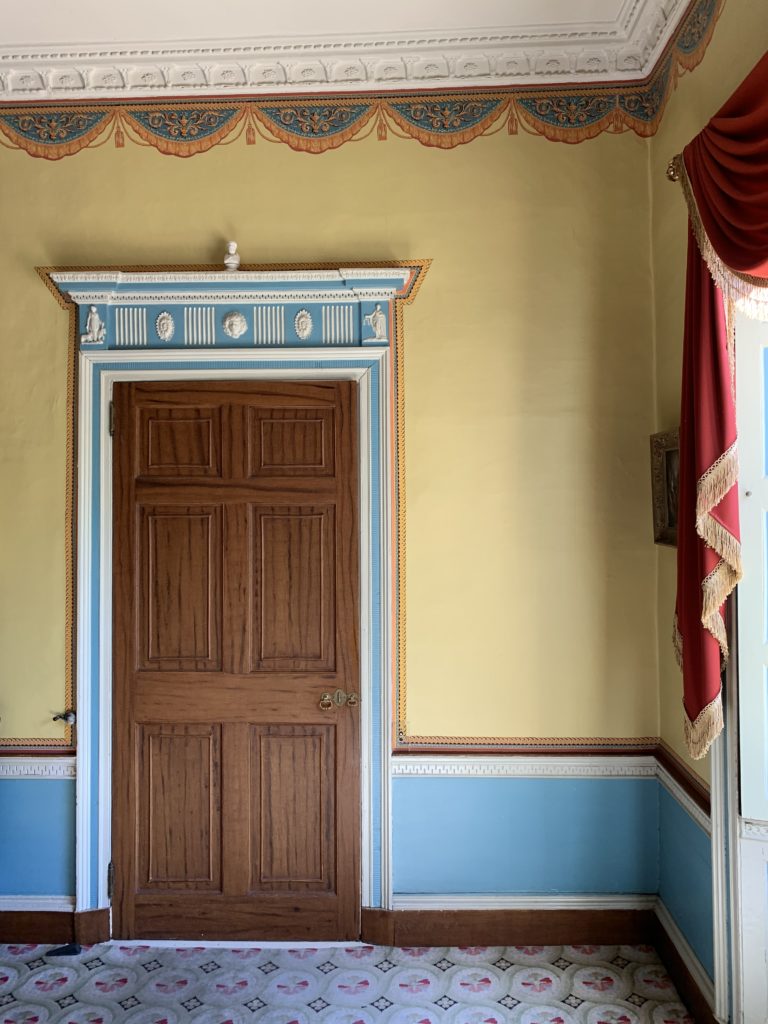 Wallpaper
In the 1916 examination of the Otis House dining room, no Federal era wallpaper remains were found on the walls. For both the parlor or dining room, curators chose to use plain papers with wallpaper borders. Rooms decorated with solid colored wallpaper, called “plain papers”, and embellished with a wide variety of colorful borders were fashionable in the period when Otis House was built. The border in this room is a reproduction of a paper from Montpeiler, the home of Revolutionary War hero, Henry Knox, in Thomaston, Maine. This was a logical choice as Knox was a contemporary of Otis and his house was likely designed by Charles Bulfinch, in 1794. The “festoon” design of the border gives the appearance of a flat textile swag embellished with an embroidered urn and foliate design. This paper was likely made in Boston and was purchased from Moses Grant.

Carpet
Removal of Victorian carpets in this room revealed rough, unfinished pine boards commonly used under wall-to-wall carpeting. In the Federal era, urban households, especially wealthy ones like the Otises, were likely to possess wall-to-wall carpets. By 1790, classically-inspired carpets like this reproduction had become popular.

Paint
Determining the original paint colors for the room required scientific analysis and involved taking samples from areas where the paint was thickest and then analyzing them chemically and microscopically. Most rooms in the house were painted with variations of a light bluish-green color with detail picked out in white, much like fashionable Wedgwood ceramics.

The doors in this room are grain painted to imitate mahogany. The fanciest room, the drawing room on the second floor, were the only doors made from solid mahogany.