Entertaining in Luxury and Light 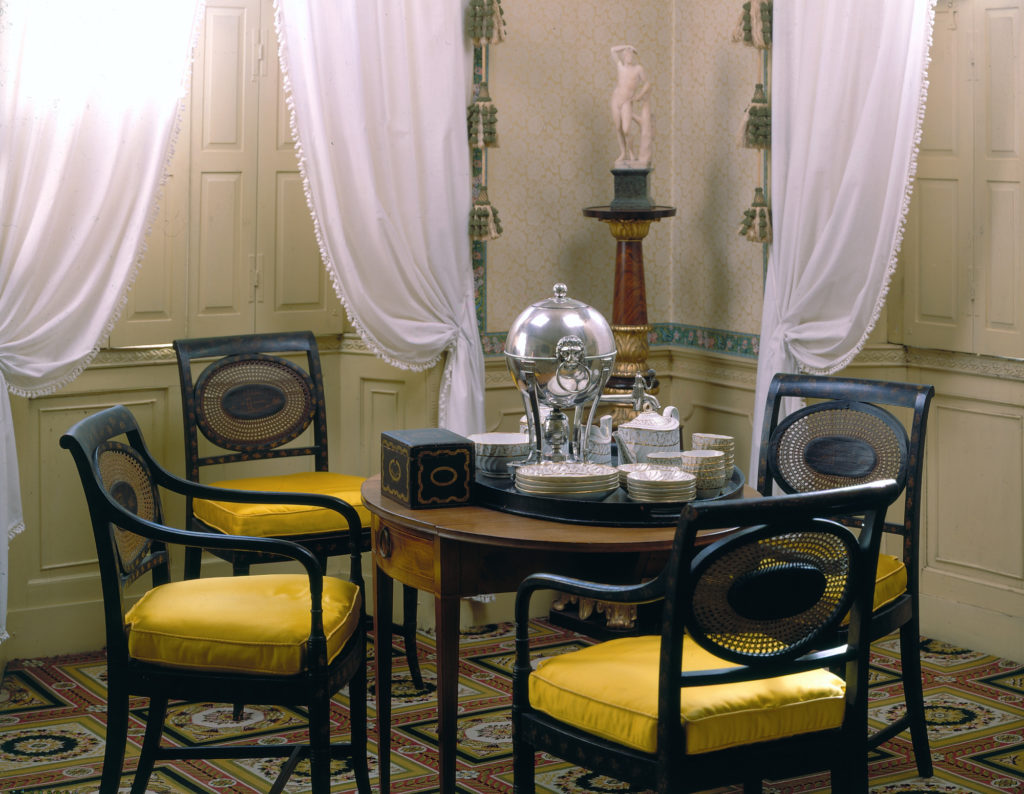 After elaborate dinner parties, the Otises and their guests “withdrew” to this room on the second floor of their mansion. The term drawing room is simply just “withdrawing” room, shortened.  It was the most elegantly decorated room in the house, with expensive wallpaper, luxurious textiles, and impressive architectural detail. It is also the only room in the house to have solid mahogany doors, complete with mirrored panels.  Mahogany was difficult to acquire and the other doors in the house were made of less costly wood that was either painted or grained to look like mahogany.  The mirrors on the doors were also quite expensive and ostentatious. The two corner doors are false— added to maintain the symmetry of the room—but were just as expensive as the functioning doors. The drawing room is the only public room in the house that was designed to be used at night.  Unlike the downstairs parlor and dining room, this room has a chandelier.  And the many mirrors on the doors and walls helped to reflect the light and brighten the room during evening parties.

The furniture and objects in this room reflect the many different kinds of activities that went on here.  After dinner, gentlemen often played games like backgammon or cards. The musical instruments would have been played by both family members and their guests, or by hired musicians, and the furniture could be pushed back to make room for dancing.  In the winter especially, the family probably spent most of their time in this room, as it was easier to heat one room and use it for many activities than to heat several rooms.  Mrs. Otis would have done her sewing and needlework here, using equipment like the sewing box and work table in the corner. 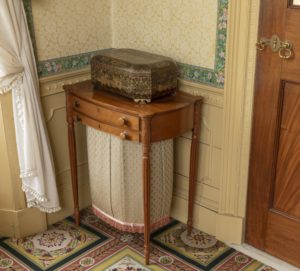 There is a ladies’ writing desk on the front wall of the room for writing letters, and a comfortable chair by the fire for reading.  Mrs. Otis would also use this room for small tea parties and for receiving visitors.  Tables could be set up and used for family meals.  So although this room was one of the fanciest entertaining rooms in the house, it doubled as a less formal “living room” as well.

The flute was an instrument largely played by men in the 19th century, as it was deemed unseemly for a woman to lift her arms above her chest.

An instrument with ancient and classical association, genteel young women were encouraged to learn the piano forte and the harp as part of their education.

Backgammon is one of the oldest known board games. A game of backgammon can be played quickly and does not require the level of concentration needed for chess, making it ideal for an evening of conversation and music.

The Importance of Light 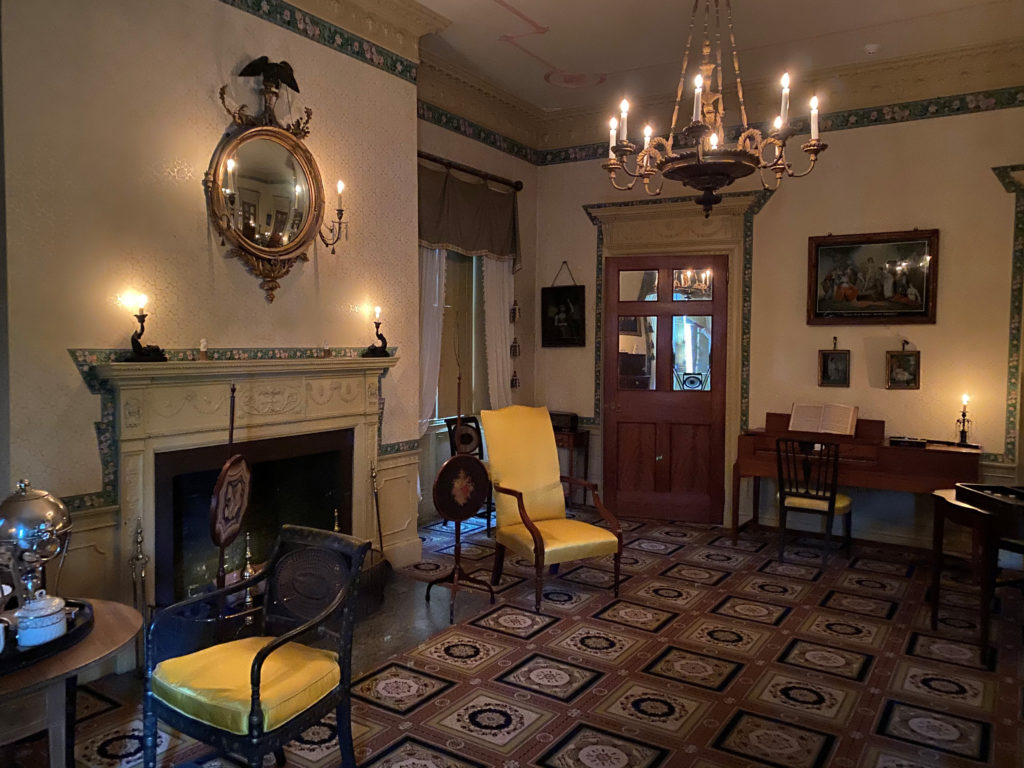 The Drawing Room might be considered the only public room in the house “designed” to be used at night. Unlike the parlor and dining rooms downstairs, this room has a chandelier, mirrors on the walls and doors, and even reflective materials in the wallpaper that when lit by candlelight would have had a brightening and shimmering effect during evening parties. Knowing that clothing looks different in candle light as compared to day light, women dressed for candlelight festivities carefully, often selecting glossy white fabrics spangled with gold or trimmed in silver, pearls, and diamonds.

All in the Name of Symmetry

What’s Behind This Door?

Absolutely nothing! The two doors in the corner of the Otis House drawing room are false doors. Symmetry was a basic tenet of Federal design and these doors were installed to keep the room in balance. In the showiest room of the house, each window was balanced by a door on the opposite wall. These solid mahogany doors with mirrored panels and fake hinges were a completely extravagant addition that served no purpose other than to impress.

The End of the Otis Era

The Otises sold their house and surrounding land in 1801 to John Osborn, a paint merchant who owned a warehouse and store on Long Wharf. John Osborn died unexpectedly at age forty eight in 1819, leaving no will.  A room-by-room inventory of the contents of the house at the time of Osborn’s death provides a detailed picture of the kind of furnishings and possessions found in the Drawing Room, including twelve arm chairs, a sofa, silk curtains, a “Grecian” lamp.

By 1822 the house was divided into two and sold, along with the surrounding land.