Welcome to Otis House, the only surviving mansion in Bowdoin Square, once Boston’s most fashionable residential neighborhood. The stately brick house was built in 1796 for Harrison and Sally Otis, a wealthy couple with four young children, and it was designed by their friend and renowned architect Charles Bulfinch. During the brief period that the Otises lived here, Harrison was serving as a congressman and spent much of his time away in Philadelphia while Sally was at home in Boston running the household and managing their growing family. After only four years the Otises moved to a larger mansion at the top of Beacon Hill, and the house they left in Bowdoin Square would witness constant changes in occupancy, use, and appearance that followed the fortunes of its neighborhood due to economic, demographic, and political forces. 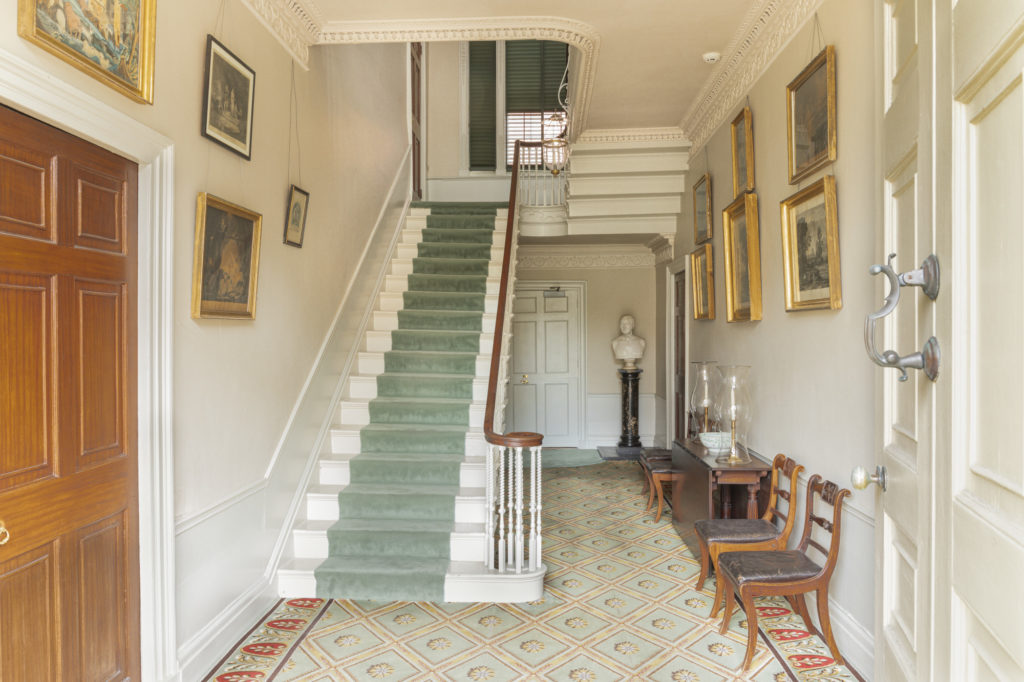 Otis House has been restored to its earliest years when it was occupied by the wealthy and politically connected Otis family. It is a landmark example of the Federal style, showcasing the taste of its original occupants and includes some of the family’s personal furnishings and possessions. It also presents the building’s later uses, paying homage to its years as an alternative medicinal clinic and a middle-class boarding house.

As the last surviving building from Bowdoin Square’s eighteenth-century heyday, Otis House presents the first chapter of Beacon Hill’s rise to becoming Boston’s most famous neighborhood. Although once recognized only for its architectural significance and affluent occupants, today Otis House tells the story of change, resilience, and the destructive forces of urban renewal.

The Rise and Fall (and Rise) of a Neighborhood

Otis House is more than simply the last free-standing home in Boston’s West End. It tells the story of dramatic change in the city over hundreds of years and illustrates a shift in demographics, culture, lifestyle, architecture, and topography.

The land that is today’s Boston was once home to the area’s indigenous Massachuset tribe and the village they called Shawmut. It was almost totally surrounded by water and connected to the mainland only by a narrow “neck.”  With the arrival of Europeans in 1600s, the town’s prosperity became focused on maritime trade, and the population settled along the harbor on the east and north sides of the peninsula, leaving the west side, bordered by the Charles River and Back Bay, largely undeveloped. By the 1780s, as Boston continued to grow, most of the population still lived along the harbor (indicated on the map in red), with the west end of the city sparsely populated except for industries such as tidal mills and ropeworks. Boston Common remained communal land and above it stood the three hills known as the “Tri-mountain,” the tallest being Beacon Hill.

At the northern foot of the Tri-Mountain stood Bowdoin Square, a fashionable neighborhood consisting of large houses owned by Boston’s well-to-do. As the place where their parents’ generation had settled, it was a logical choice for Harrison and Sally Otis to build their new home in 1796. But change came quickly with the building of the West Boston Bridge (now the Longfellow Bridge) connecting Cambridge to Boston. What was originally a quiet, residential road that dead-ended at the river was renamed Cambridge Street and soon became a busy thoroughfare that would drastically change the character of Bowdoin Square.

As traffic along Cambridge Street increased, Bowdoin Square developed into a commercial area. Those who once prized the peaceful location, including the Otises, abandoned it for the new elite neighborhood being developed on the south slope of Beacon Hill overlooking Boston Common. With the flight of wealthy Bostonians, most of the Bowdoin Square’s mansions were torn down and replaced by storefronts, theaters, and churches, or repurposed into hotels, boarding houses, or businesses.

Otis House survived because it was originally built far back from the road. Shortly after the Otises left, the land in front of the house was sold as a separate parcel and developed as storefronts. During the century that followed, the house stood quietly and relative untouched behind the busy stores on Cambridge Street. In 1916, Historic New England purchased Otis House to become its Boston headquarters and museum. Nine years later, the house was saved from demolition when the city’s plan to widen Cambridge Street called for its removal. Historic New England lifted the house and rolled it back more than forty feet. The storefronts were demolished by the city and Otis House once again had an unobstructed view of Cambridge Street.

As the century progressed, the West End continued to become a densely populated working class neighborhood, home to thousands of Jewish, Irish, Italian, and Polish immigrants, joining an already-established African American community. In the 1950’s and 60’s, however, most of the buildings were demolished and the residents displaced during an aggressive urban renewal campaign.

Today, Otis House provides a historic canvas for telling the story of the now-vanished residential neighborhoods of Bowdoin Square and the Old West End. But it also keeps alive the stories of the multitude of people who have, over time, called West Boston their home and illustrates the inevitable change of a modern-day city that continues to grow and evolve.

According to contemporary accounts, Sally Foster Otis (1770-1836) was described as “remarkable for beauty and wit as well as intellectual vivacity, tempered always by an indescribable grace.” Although Sally and her wealthy women contemporaries were part of a social whirl of high society parties they also worked very hard, leading busy strenuous lives that required them to juggle conflicting demands on their time and energies. Sally was the mother of eleven children, oversaw of a complex household that employed a staff of servants, and also managed Harrison’s business affairs when he was away in Congress.

Harrison Gray Otis (1765-1848) was born into a distinguished family of wealthy and successful individuals. He grew up in Bowdoin Square, then Boston’s most fashionable residential district. On May 31, 1790, after two years of courtship, Harrison married Sally Foster (1770-1836), the daughter of a wealthy Boston merchant. In 1795 Harrison began his career in real estate development that would eventually make him one of the wealthiest men in Boston when he, and the other Mt. Vernon Proprietors (including renowned architect Charles Bulfinch), purchased artist John Singleton Copley’s pasture on the south slope of Beacon Hill and began to lay out a system of streets. In 1797 Harrison Gray was elected to the United States Congress, serving until 1801 as a member of the Federalist Party and served in the Massachusetts legislature from 1802 to 1817. Between 1818 and 1822 he served as a United States Senator, and in 1829, a two year term as mayor of Boston.

The lives of the servants and staff who worked in Federal Boston were closely intertwined and mutually interdependent with their employers, and the Otises would never have been able to maintain their home and family without their labor. How many servants lived and worked at the Otis’ home is hard to say. The records show five male servants from 1798 to 1800, with no more than two at a time. However, these records can be spotty and only reference men over the age of 18. There were probably younger servants, female servants who did not appear in tax records, and day servants who commuted to their place of employment. What we do know about three of the Otis’ servants, Abraham Francis, an African American footman, William Burgis, a teenaged coach man, and “Harlow,” a nursery maid, offer a rare glimpse into everyday life at the Otis household. These echoes of domestic life help us to visualize and understand the rhythms and dynamics of daily life for people at both ends of the economic spectrum in Federal-era Boston.

Charles Bulfinch (1763-1844) was one of the most important architects working in and shaping post-Revolutionary Boston. His life paralleled that of his close childhood friend Harry Otis; both born into patrician families, each growing up in Bowdoin Square, and attending Harvard College. Heavily influenced by architects in England during his travels in Europe, Bulfinch began designing buildings in Boston that became known as the Federal Style. In addition to the three houses he designed for the Otis family, Bulfinch was hired to design many houses, schools and public buildings in New England, including Boston’s new State House on Beacon Hill and the operating theater of Massachusetts General Hospital.

By the 1830s, Otis House was divided into two living spaces and the larger portion of the house was rented by Elizabeth and Richard Mott. For the Motts, the Otis House was not only their home but also their place of business from which they ran “Motts’ Patented Medicated Shampoo Bath,” an alternative medical establishment. At this location the Motts offered free medical advice, sold over the counter remedies, and treated patients with their patented steam bath cure. While popular with female patients, the Motts were not considered qualified doctors by the mainstream medical profession, which was taking hold in the neighborhood at the time.

Born into and reared in the traditions of Beacon Hill, Harvard University, and Boston’s elite institutions, William Sumner Appleton (1874-1947) made preservation his life’s work, culminating with his founding of the Society for the Preservation of New England Antiquities (now Historic New England) in 1910. In 1915 Appleton led a campaign to buy the Harrison Gray Otis House, making it the organization’s headquarters, but in doing so precluding a Jewish corporation’s plan to buy the building and remodel it as a home for aged women. Considering both his strengths and flaws in the context of his time, Appleton had a lasting influence on historic preservation, paving the way for the development of new interests, perspectives, and practices.