What Makes it Federal?

When Charles Bulfinch returned to Boston from Europe in the 1790s, he decided he would not settle down to any one business but spent several years giving architectural advice to his friends.  At that time architecture was not considered a profession, but rather a leisurely pursuit for wealthy gentlemen.  Bulfinch designed all three houses that the Otises built. The architect’s presentation drawing seen here displays the many features of Federal architecture.  Note the low hip roof, flanking chimneys, marble string courses, neoclassical decoration, Palladian window, elliptical fan light above the door with side lights, lunette window, and symmetry of the house.

This drawing was created by Bulfinch in 1796 to communicate his design idea for the new Otis family home. The final structure came close to the rendering but did not include the second floor balconies, triple-hung windows, or the swag panels.

Elliptical fanlight over door with side lights

Windows get smaller as they go up the facade

The Second and Third Otis Houses

From Bowdoin to Beacon 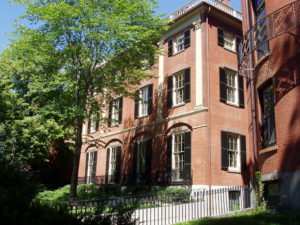